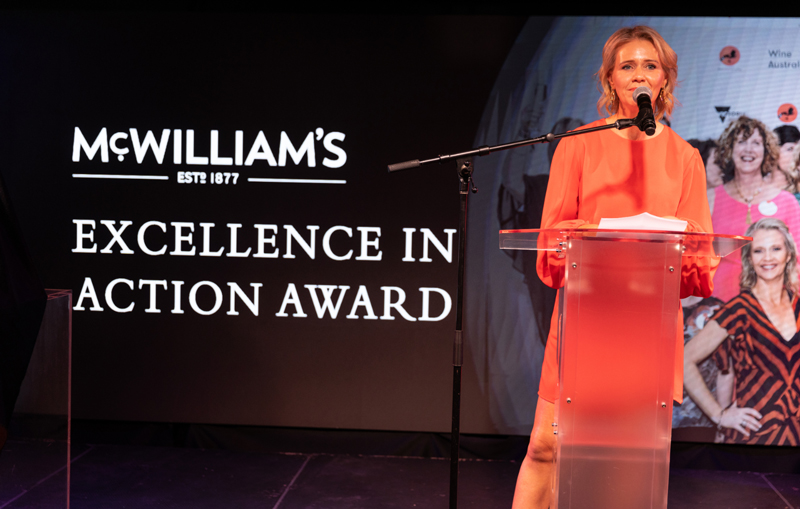 Upon accepting the Maurice O’Shea Award, Dunsford said: “I’m honoured to be in the company of past winners of this award. I’ve always been pleased that I chose the profession of winemaking, rather than a lawyer or doctor, as the clients of my friends who are lawyers or doctors are unhappy to see them. But everyone is happy to see a winemaker.

“I want to pay tribute to the great Len Evans (always Mr Evans to me), a past winner of this award and who, in the late 80s, wrote a reference for me to Krug, which opened the doors of the champagne houses to me, and of course, the rest of my story is now history.”

The award recognises Dunsford’s selfless contributions to the Australian wine industry spanning four decades in addition to blazing a trail for women in the wine industry, since first finding her passion for winemaking while studying at the University of Adelaide in 1973. Dunsford later became the first woman admitted to study Oenology at Roseworthy Agricultural College.

Her string of firsts also includes being the first female winemaker to become a wine show judge, the first female to hold an important winemaking position at a large company, one of the first women in the country to be a wine educator and consultant, and the first woman to be employed at vintage at the renowned champagne house, Krug. Her consulting work led her to Chapel Hill where she oversaw an impressive 19 vintages as chief winemaker.

Adrian Sparks, Chief Winemaker for Mount Pleasant Wines said: “Pamela’s dedication to the industry extends far beyond her direct contributions to her employment at some of Australia’s finest wineries. Without seeking reward or recognition, Pamela has given so much to the industry as a thought leader, educator, consultant, innovator and trailblazer. She wholly embodies what the Maurice O’Shea Award stands for and we are so honoured to celebrate her achievements at this special event.”

In addition to the Maurice O’Shea Award, the new McWilliam’s Excellence In Action Award was also presented at the ceremony. The new award was created by McWilliam’s Wines' new owners - the Calabria Family Wine Group - as part of the new collaboration with Mount Pleasant to focus on the many current challenges facing the wine industry and the people or organisations tackling the key issues head on for the betterment of the industry.

On accepting the award on behalf of the AWIWA, Founder Jane Thomson said: “It is a great honour to be the inaugural winner of this new and important industry award, and I want to thank McWilliam’s, the Calabria Family Wine Group and the judges.

“The AWIWA is enormously proud of the impact we have made on gender equality in our industry, but there is still so far to go. Whilst the wine industry is currently facing challenges on many fronts, this remains the issue of our time and we urgently need more resources, funding and energy to be directed towards increasing equality in the workplace for the betterment of the entire wine community.”

The AWIWA was founded in 2015 with the aim to support and mentor women, share experiences, encourage, inspire and action change. The awards play a critical role in recognising positive female role models and leaders in the sector, which the industry needs more of.

On recognising the AWIWA for its first McWilliam’s Excellence in Action Award, Third-generation Sales & Marketing Director of Calabria Family Wine Group Andrew Calabria said: “There was an incredible selection of finalists considered for this new award, but the action demonstrated by Jane and the wider Australian Women in Wine Awards Advisory Board in mobilising the community to celebrate and recognise the female leaders in our industry stood out in the final selection.

“Diversity, equality and fairness for all in the workplace is not a challenge isolated to just the wine industry, but it's one we recognise is moving in the right direction thanks to this incredible organisation and the work they do to inspire change across the category.”

The inaugural Australian Wine Industry Awards was presented at an invite-only ceremony and dinner at Aurora Restaurant in Adelaide. Leaders across the industry, media, producers and industry body representatives gathered to find out who would receive both awards on the night, followed by a special dinner matched with Mount Pleasant and McWilliam’s Wines.

As part of the evolution of the awards, the Maurice O’Shea Award Trophy was designed and created by Design Awards in Sydney. Taking inspiration from Mount Pleasant’s new branding and the original wine labels created by Maurice O’Shea. The new Mount Pleasant brand utilises O’Shea’s family crest in its simple and confident form, and they utilised the swan from the crest as the hero of the trophy.

The trophy for the new McWilliam’s Excellence in Action Award was designed and created by celebrated Australian glass artist Nick Mount in Adelaide. His contemporary interpretation of the glass wine bottle frames the overall work of the trophy, enhanced by Nick’s artistic flair and ability to look at materials and processes in new ways.

Mount Pleasant and McWilliam’s Wines would like to thank Gold Sponsors for this event, Orora and CCL, in addition to Silver Sponsor Interpack and supporting partners Riedel, the Australian Wine Research Institute, and Jansz Tasmania.

Maurice O’Shea was the eldest child of the Irish John Augustus O’Shea and the French-born Léontine Francoise Beucher. When his father passed away, it was Léontine who arranged her eldest son’s trip to France in 1914 at the age of 17. It was in 1921 that O’Shea, having just returned from France, persuaded his mother to purchase a 16.3-hectare property on the rich, volcanic soils in the Parish of Pokolbin, in the Hunter Valley. Maurice O’Shea’s blending techniques and sophisticated use of oak – talents learnt while studying oenology at France’s Montpellier University – were credited with producing red table wines of enormous flavour, intensity and longevity. The McWilliam family, led by Keith McWilliam, recognised the talent and potential of this great winemaker. In 1932 they joined forces with Maurice O’Shea by purchasing 50 per cent of the winery, acquiring the remaining share in 1941. In 1956, aged 59, Maurice passed away surrounded by both Marcia and his daughter, Simone. Initiated in 1990, the triennial McWilliam’s Maurice O’Shea Award commemorates and pays homage to the legendary Maurice O’Shea.

Winners of the Maurice O’Shea Award include:

Winners of the McWilliam’s Excellence In Action Award include:

It was 1921 and Maurice O’Shea wasn’t afforded the luxury of electricity. Equipped with only basic tools and an old basket press, O’Shea brought Mount Pleasant to life. 100 years on, the equipment and names have evolved, but the principles and the vineyards remain the same. Along with a philosophy of honouring O’Shea’s legacy through individual wines, special sites and celebrated styles. There have only been five Chief Winemakers at the helm throughout Mount Pleasant’s 98-year history. The winemaking team, led by Adrian Sparks, demonstrate a philosophy focused on sharing the best of the Hunter Valley told through every vineyard and every glass.

McWilliam's Wines showcases regional-specific characters, superior quality, impressive depth and full flavour expression. With 140-plus years of winemaking knowledge and passion passed down through six consecutive generations of winemakers, McWilliam's has pioneered and championed the very best of Australia’s wine regions, with a strong focus on New South Wales, renowned for its diverse regions that consistently produce award-winning wines. McWilliam’s Wines have always believed that quality wines are made by people, not companies. As well as a long list of family winemakers and employees, McWilliam’s is blessed by a team of staff that share the passion for the range of McWilliam’s wines. In 2021, McWilliam’s Wines was acquired by Riverina-based Calabria Family Wine Group.